The blurred lines and murky relationships between Joy Van and Sachen, Color Dreams and Sachen, and many of the other independent developers from the golden era of gaming have always been interesting to me. At that time, it seemed as though every unlicensed developer or publisher was sleeping with every other company of a similar background; Share Data games have been found in Color Dreams shells, Wisdom Tree development copies have been found on Tengen boards. And prototypes from the Taiwanese developers have turned up stateside. That’s the origin of the Chinese Kung Fu prototype that is now in my possession.

Another collector had purchased a bunch of scrap items from Wisdom Tree, the religious company that Color Dreams had eventually become. Among those items was a Sachen pcb containing the aforementioned game. I saw the item come up for grabs, and I immediately messaged the owner to inquire about the provenance of the item. When it comes to purchasing items such as prototypes and other rarities, the origins of the item are king. After learning about the history of the cartridge, I felt confident enough in the legitimacy of the item to make the purchase. At that point, all that was left was a few weeks of agony before I could check out the cartridge firsthand. There are several interesting things to note about the game, but first we need to take a trip back in time to around 1988.

The video game behemoth first stepped on the scene in 1988, according to their former website. By November of that year, Thin Chen Enterprise would begin advertising for their first Famicom release, Jovial Race, and it would see the light of day early the next year. Jovial Race would be the first of Thin Chen’s TC series of unlicensed Famicom / Nintendo games. Hidden Chinese Chess would appear next, followed by Sidewinder, Little Red Hood, and several other titles. Business would continue as usual, all the way through TC-010, Mahjong Trap. After this title, things at Thin Chen Enterprise would be shaken up a bit, and it would be the start of Sachen’s legacy.

The original ten Thin Chen games (TC-001 through TC-010) were all credited to a company known as Joy Van. The company’s distinctive JV logo could be spotted on the game’s original packaging, and the copyrights were always to Joy Van. The name on the back of the box, however, would be various spellings of “Thin Chen Enterprise”. TC-011, Chinese Kung Fu, would be the next in the Thin Chen series of games. Like its predecessors, this game also had a Joy Van logo on the box, but unlike the others, the code appearing within would be a bit different.

When one loads up the original versions of Chinese Kung Fu, he or she is greeted by the following words: Sachen ©1989 Copy Right. It is precisely with this game where Joy Van disappears from the scene forever; every future release is credited to either Sachen or Thin Chen Enterprise. If you can manage to make it to the end of Chinese Kung Fu, you will see that a Joy Van logo will appear on the credits screen. So what happened to Joy Van?

A friend of mine, MLX, had the following information to share, which he had obtained from someone close to the company: “Joyvan and Sachen merged and the boss of Joyvan created Idea-Tek.” Although this information is undoubtedly correct, I personally feel that the situation may have been more complicated than that.

For instance, Thin Chen Enterprise and Sachen have been synonyms for each other since the formation of the company, yet the Sachen name only makes an English appearance after Joy Van leaves the scene, and this is on both packaging and in-game logos / copyrights. Strangely enough, it was only after the merger that Thin Chen acquired a second location. Starting with TC-012 (The World of Card Games), two addresses are listed on the back of the Thin Chen game boxes, namely one for development and the other for manufacturing. The timing of these changes could have been coincidental, but they are still worth mentioning. Perhaps the most intriguing thing concerning the Thin Chen / Joy Van circumstances is the following: sometime during the 90s, Micro Genius (another game developer / publisher) acquired the rights to and published several of Idea-Tek’s original games. It makes me wonder if the so-called Joy Van / Thin Chen merger was more comparable to the Idea-Tek / Micro Genius situation, where the rights to JV’s catalog of software was just sold to Thin Chen. Who knows, maybe the Joy Van company was little more than a small development team that got purchased in a buyout.

Either way, the merger seems to have occurred around the middle of August of ’89, shortly before Chinese Kung Fu was released. The boxes were already designed and printed, and but the program itself would be modified, with Joy Van logos removed and Sachen information inserted. The game would then appear on shelves, sitting awkwardly as the one mismatched game in a sea of uniformity. That basically brings our Joy Van / Thin Chen / Sachen story to a close, for now. But Chinese Kung Fu has its own interesting quirks, which are worth mentioning as well.

I cannot say it in any other way than this: not all versions of Chinese Kung Fu are created equal. Going against what was previously thought, the original version of the game mimics the Double Dragon series quite nicely, with the champion being able to make use of a flying side kick, among other fighting moves. This feature was edited out of the 1989 Sachen version of the game, and it was replaced with a simple jump. When Chinese Kung Fu was distributed by Spica in Australia and New Zealand, the guys and Thin Chen decided to wise up and re-implement the flying side kick, using the original version of the game, and leaving the horrid Taiwanese release back on the island. This version of the game has a 1990 copyright. It is also worth mentioning that there have been some rumors circulating around that the side kick is just an exclusivity for the later versions of the game; this is a wrong assumption, however, as screenshots from the earliest advertisements all depict the main character using this move. 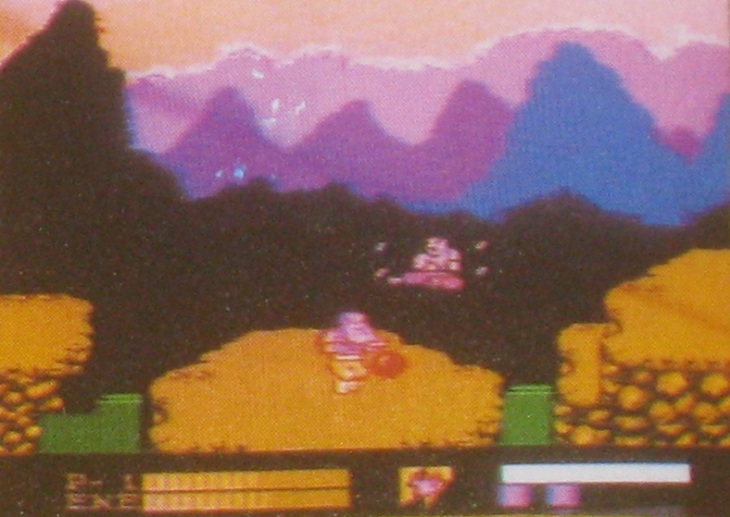 Advertisement Photograph – Note the Flying Side Kick and Item Bar

At some point, Thin Chen would also shop this title around for publication in Western markets, and they had offered Color Dreams the chance to publish the game in America. For whatever the reason, Color Dreams declined, and the game never made it to Western markets on 72 pin Nintendo format outside of the limited quantities of carts that Thin Chen themselves were able to distribute through unorthodox channels. For this market, the game also underwent a name change, as Challenge of the Dragon. And for those who are wondering, this version of the game also included the original game code, giving our protagonist the use of the important flying kick. 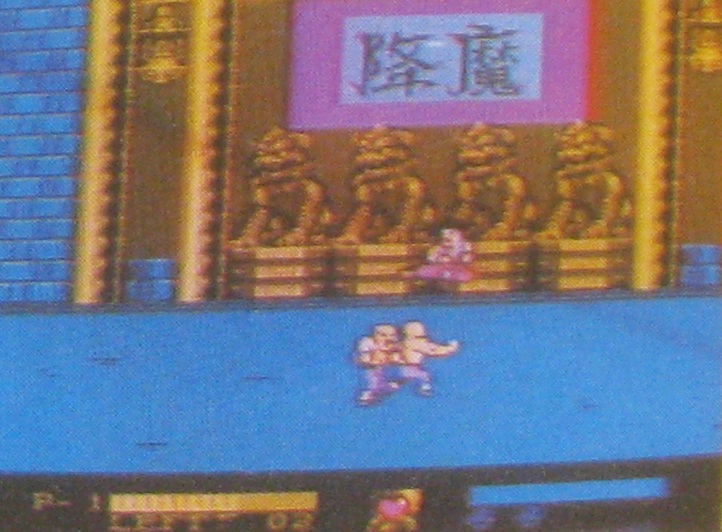 Advertisement Photograph – Note the Flying Side Kick and Item Bar

But wait!!! Wasn’t there a Challenge of the Dragon game released in America on Nintendo?!? There sure was, but it wasn’t the Thin Chen game. Color Dreams developed that game in-house and published it. Although the two games are of a similar style and share the same name, they are totally different products. So which Challenge of the Dragon came first? Both versions were released in 1990 so it’s hard to say. I tried reaching out to the programmer of the Color Dreams game to ask about the origins of the game’s name, but sadly I never heard back. As with this game title, there was some other borrowing going on between Thin Chen and Color Dreams. Thin Chen published a game titled Raid (published in America by Color Dreams as Silent Assault) and Color Dreams developed a game in-house titled Raid 2020. Again, both games could be classified as being similar, yet they are both totally different products. Thin Chen’s changing of Chinese Kung Fu to Challenge of the Dragon most likely was to help aid in sales on Western shores. Knowing that Thin Chen / Joy Van had brought the game to the attention of Color Dreams, it seems quite possible that Color Dreams may have even considered publishing the game themselves. Looking at it from this perspective, it’s fair to say that Chinese Kung Fu could be viewed sort of as a “lost” Color Dreams game.

When it comes to Chinese Kung Fu, I am terrible at the game. I played through all of the Double Dragon games as a child and although this one feels like a direct sequel to those games, the difficulty has been increased. So when it comes to making comparisons and searching for differences between the prototype that is in my possession and the retail version of the game, it will be an on-going process. I have made a few interesting discoveries though.

To begin, my prototype is an elusive Joy Van version of the game. The title screen still has the Joy Van logo and copyright, showing that the game was most definitely supposed to be part of the Joy Van series before the so-called merger took place. In addition, when you head to the game itself, there is a major difference that I have noticed. All of the weapons seem to be available from the start. By pressing start and then select, you can change the item in the box, and cycle through about five different items. Excluding the heart, each item has a power bar, which I presume is meant to decrease as the item is used.

This setup may not be fully implemented in my copy of the game though, as I can’t figure out how to “use” the items even after selecting them. I’ve watched a few videos of folks playing through the game online, but in those versions of the game, the special items seem to be displayed elsewhere, and the weapon display in the Joy Van game is MIA. Maybe this is just an unfinished feature in the prototype, or perhaps it is also a retail game thing that no one really knows about. Due to the obscurity of the game itself, it is not something that is easy to determine for certain, though a similar system also appears in some old advertisement photos.

Despite its flaws, Chinese Kung Fu is one of the better Thin Chen games. When one overlooks the difficulty problem, the game can be seen as a nice sequel to Double Dragon. The music is mediocre at best, but the graphics are beautifully drawn, presenting one with a Chinese-style Double Dragon game.

In addition, the game sits at the crossroads in the history of Joy Van, Thin Chen, and Sachen. It also represents a product that could have been part of unlicensed canon in the United States, but was never meant to be for unknown reasons. Rich in history, revisions, and mediocre gameplay, Chinese Kung Fu would make it on my list of Thin Chen games worth checking out.

2 thoughts on “Challenging Chinese Kung Fu Dragons: The Color Dreams Game That Could Have Been”