For the past several months, collectors and gamers alike have been going crazy about Nintendo’s recent release of the NES Classic and Famicom Mini, cutesy plug ‘n play machines shaped as smaller versions of the gaming consoles we hold dear to our hearts. Back when the releases were announced, I had heard that these were being done to celebrate the 30th year anniversary of the NES, but the dates don’t totally match up, so who knows, maybe I am just having a dumb moment. Either way, I discovered a neat little bundle a few weeks ago, and I wanted to share it with everyone. Since I don’t read much Japanese, maybe my search queries are just atrocious, though I prefer to think that the item I am about to unveil is just really obscure.

The Hiryuu no Ken (Fist of the Flying Dragon) game series first appeared on the scene in 1985, lining arcades in Japan and North America. The franchise would continue to find success on a number of different gaming platforms, finishing up with a Japanese-exclusive release on Game Boy Color, Hiryuu no Ken Retsuden GB. This chapter of the series would appear right before Christmas of 2000.

Recently I had been surfing the net and I stumbled upon the following:

Note the words “20th Anniversary” in the corner of the box. At first blush, it seemed as though this was a special commemorative package that would pair the Hiryuu no Ken Retsuden game with part three of the Famicom series, 5 Nin no Ryuu Senshi. What 20th anniversary would have been celebrated though? That of the game franchise, or perhaps the original release of Hiryuu no Ken III? Also, could such an awesome feat as Culture Brain making their Famicom game available for purchase so late after its release be real? The more I thought about the package, the more questions I had, and finally curiosity got the best of me. By then, it was just a matter of waiting for the package to arrive, so that I could examine things for myself.

When things finally did arrive, I decided to take a peak at the rear of the box before cracking it open. 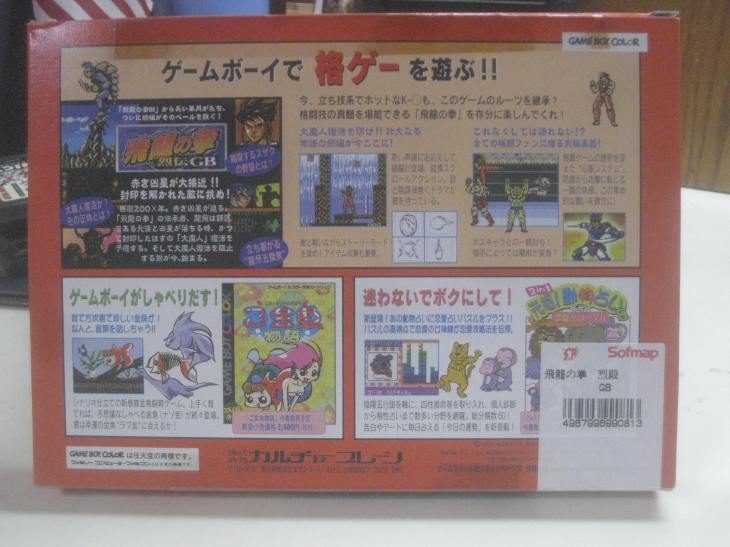 Do Other Bundles Also Exist?

The back of the box shows some pictures from the Hiryuu no Ken Retsuden game, as well as what appears to be some advertisements for some other games. I also found a copyright date of 2000 on the box, but it seems that this is just linked to the GBC game, rather than the release date of the bundle.

Peering in from the top, we can see boxed copies of both Hiryuu no Ken Retsuden and Hiryuu no Ken III: 5 Nin no Ryuu Senshi, two peas in a pod, sitting happily together. And time for a shot of the two games outside of the bundle packaging:

Sadly, it seems that both games are just normal retail versions – there doesn’t seem to be anything marking them as belonging to this 20th Anniversary package. I’ve seen cases of Hiryuu no Ken III floating around for sale before, so my best guess is that Culture Brain still has (had?) a nice amount of unsold stock, and decided to bundle it with unsold product from their GBC release, as a way of moving some old inventory. With a significant anniversary coming up by 2005, it seems like this would have been the perfect way of clearing out the extras. This is all speculation though, so if anyone has some concrete information about this release, please get in touch with me!